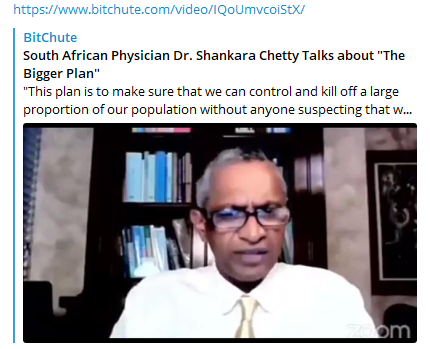 “There are inconsistencies, fearmongering, and coercion.  The question is why?

The pathogen that was causing death, the pathogen within the virus, is the spike protein.  Spike protein is also what the vaxxine programmes your body to make.  Therefore, those who have received the Jab, are now pathogen creators.

What’s happening on a global scale?

Spike protein is one of the most contrived poisons or toxins that we have ever made.  The aim of this toxin is to kill billions without anyone noticing it.  A poison with an agenda.

We have an engineered virus and mandated vaccine that follows on from each other.  They’ve engineered a virus to create viral virulence and bolted on a weaponised package called Spike Protein.  So now we have an elaborately engineered toxin put into a coronavirus, or let’s call it a vector and we’ve exposed the planet to a small dose of it.

Initially, Spike Protein triggers an allergic reaction.  This allergic reaction when untreated causes death.  This is what we have seen with Covid illness.  But this is not the end game, that is to test the water.

You’ll get a small percentage of people to react.  You see all the deaths.  The 8th day is when this reaction occurs, so best to isolate the planet for 14 days, so nobody notices when this occurs.  People get to the hospital too late.  We mandate protocols in hospitals to engineer death. (Link) And damage to steering all the fear that we need, to keep the story going and keep everyone confused.  This steers humanity toward Mass formation. (Link)

We take away all the faith and hope people have.  Keep people isolated.  The result is, we have been conned into thinking that giving away our freedoms for the greater good is the best thing for us. So, the safest place for us is in jail. Which is where we are at this point in time.

If we understand what Spike Protein is meant to do, it will trigger an allergic reaction, with immediate death from that.  But, if you poison someone, and they don’t die immediately, you’ll notice the poisoning.

So, when you give vaxxine, the first 14 days after the vaxxine and side effects cannot be attributed to the vaxxine because that is where all the allergic reactions would lie.

After 14 days we’ll see the endothelial injuries that this vaxxine causes or the Spike Protein and its influence on ACE2 receptor.  Those are the deaths that are meant to follow.  And they will never be pinned onto Spike Protein – a very well-engineered toxin.

Spike protein is also a membrane protein.  So the mRNA will distribute this through our body.  It will be made in various tissues throughout our body.  It will be incorporated into those membranes around our body, into specific tissues.  Those tissues will be recognised as foreign and trigger a host of autoimmune responses.

So, the deaths that are meant to follow the vaxxine will never be able to be pinned on the poison.  It will be too diverse.  There will be too many and too broad a time frame.  For us to understand the connection to the poison, the Spike protein.

The toxin is dependant to the host’s response to it. So we have a mild, moderate and severe illnesses. But we keep chasing the virus.  But the virus is just the vector, to give us a taste of the poison.

In the long term, this toxin will get people with pre-existing illnesses to have those illnesses exacerbated.  It has bits of prion in it, it has bits of HIV protein in it, it is definitely engineered. Meaning that people with cancers will have their cancers flair-up and they’ll say the person died of cancer.  People with diabetes and high blood pressure are going to have strokes and heart attacks, and we attribute those to their pre-existing conditions.  People are going to develop autoimmune conditions over time.  The diversity of which will never be addressed by pharmaceutical intervention.

We need to understand the intention, the illogic, the coercion, the suppression is all warranted if you understand there is a bigger plan to make sure we can control the population and kill off a large portion.

We’ve given up our freedoms because we unanimously agreed that was the best place for us.  And now, if we want our freedoms back, we have a mandated vaxxine. We’ve been herded like cattle.

The vaxxines make absolutely no sense sold as our saviour from the start.  But if we look at the science, the science does not play out.

Vaxxines are meant to stimulate immunity, to prevent infection and transmission. These mRNA gene therapy Jabs do not do that.

The vaxxine has no group benefit, only individual benefit if it does that much. “